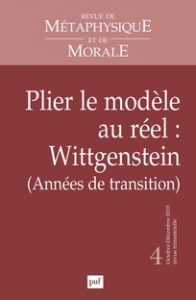 Abstract : “When words are not just, then the works of art are excluded, and then if works are ruled out, then morals and art are ill. Which means that “justice is not rightly applied and the nation does not know where to stand up safe” (K. Kraus).
Not only Wittgenstein has his own view on fetichization  (of “objects”)  as regards the relation of designation of objects (as ontologically  given) by names and developed an interesting  critique of the “epistemological ritual”  of naming « objects » that has a strong political dimension (Aldo Gargani’s point)  but there is much to say as regards the benefit of a Marxist reading in parallel to a linguistic approach to objects. The role of  the economist Sraffa’s conception (close to Gramsci) and his influence on Wittgenstein’s radical turn to his so-called “second philosophy” are to be mentioned in so far as they contribute to shed light on the social-political importance of the concept of “praxis” in Wittgenstein’s Philosophical Investigations. Yet far from me the idea that language and politics match. The point is rather to establish criterions of efficiency different in kind rather than intrinsically opposed.There are indeed good reasons for comparing the two critical diagnosis of semantic reification with social reification, given the existence of (austro) marxism in the social-political context of “Vienna the red” in the 1920’s as well as in the Marxist environment Wittgenstein was acquainted with in the 1935’s in Cambridge. Yet there is more to say in order to justify the use by Wittgenstein of the concept of “praxis”. Does “Praxis” as a key-word in Wittgenstein’s conception of “philosophy as an activity” in his second philosophy of “forms of life” contain a programme of application of symbols  in life that really witnesses the search for a socio-political efficacy beyond  a linguistic kind of praxis ? »

Symposium au cours duquel j’ai donné une conférence : « Science, culture in front of media: How to avoid the decline of the effort to strengthen thinking ?«